On April 5th, 2012, the Grand Canyon Institute’s Research Director, Dave Wells, took on Nick Dranias of the Goldwater Institute over the issue of Public Employee Compensation. 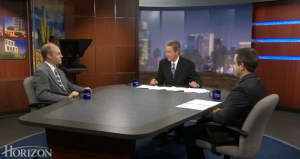 Round one was on Horizon.  Watch the debate here.

Then on June 1st the Goldwater Institute repeated many of the same arguments in an op-ed piece in the Arizona Capitol Times.

The Grand Canyon Institute responded with a thorough critique of the Goldwater Institute’s claims and work on the issue in the Capitol Times on June 15th:

Governor Doug Ducey will introduce yet another austerity budget that … END_OF_DOCUMENT_TOKEN_TO_BE_REPLACED