The Arizona Capitol Times reports backlogs plague state agencies and just the backlog in highway repairs may be costing you $300 a year. But no mention of Gov. Doug Ducey extending a state hiring freeze or that nearly $2 billion has been transferred from transportation to help the General Fund make ends meet since the last recession.

Arizona has had a hiring freeze since 2008.  The number of state employees has been decreasing, about 3 percent just since Gov. Ducey took office, which has been touted to “save” $21 million, but at what cost?  Arizona already ranked 46th in per capita state employees and 49th in per capita state payroll. So it seems reasonable to wonder how much of the backlogs have to do with low employment?  Hopefully, the Arizona Capitol Times will check into it.

Back in the fall, the Auditor General noted that backlogs in road repair projects are costing Arizona motorists $1.5 billion a year in added vehicle repairs costs as estimated by the American Society of Civil Engineers–or $318 per driver.  Over the next 25 years, ADOT expects its current revenue stream to cover only one-fourth of costs–or a $63 billion shortfall.   Get it.. we’re only planning to spend $1 for every $4 of anticipated costs–that’s not a small difference.

Last we looked gas was under $2 a gallon.  Arizona’s gas tax has not been raised in 25 years.  Politicians recoil at talk of raising gas taxes, because they are politically unpopular…but if drivers knew that failure to fund road repair was costing them $300 a year they’d be happy?

How many hidden costs are there from the state hiring freeze and inadequate revenues that we’re missing?

Next time your car needs fixing; you might want to send a copy of the bill to your state legislator and governor. 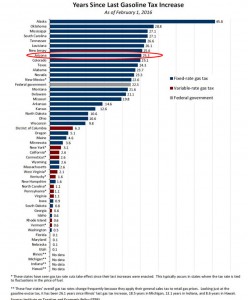 Sorry to disappoint you. There’s not more to show!  If this was a full study you’d find it here.  As a blog post, it’s all under summary.