Robust employment growth was already occurring in Arizona’s leisure and hospitality sector prior to Governor Doug Ducey’s announcements to reinstate work search requirements for the jobless and replace the weekly $300 federal unemployment supplement with a return to work bonus. Data from the Bureau of the Census establishment survey suggests that, despite the lower pay in that sector,the work search waiver and $300 supplement were not having as great an adverse impact on people returning to work as has been suggested.  Of about 22,000 job gains in the employer survey from February to April, more than half of it was in the Leisure & Hospitality sector–including 8,000 in from March to April alone. 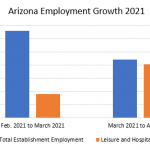 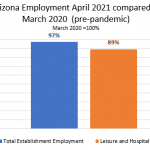 Supreme Court Rewards Rich with Porsches Everyone else gets Pizza

In its analysis of the state government’s 2.5% flat tax … END_OF_DOCUMENT_TOKEN_TO_BE_REPLACED

AZ Budget Priorities: Massive Tax Cut for the Wealthiest 1% OR Invest in the Education of At-Risk K-12 Students

Budgets are about values and priorities.   One key question for … END_OF_DOCUMENT_TOKEN_TO_BE_REPLACED

The combination of an unprecedented strong federal fiscal response to … END_OF_DOCUMENT_TOKEN_TO_BE_REPLACED