The Grand Canyon Institute agrees with Governor Ducey and the educational community. Prop. 123 needs to be approved by voters on May 17. Prop. 123 is an important start, but restoring funding of legal minimums is not a substitute for substantive discussion on real investments in K-12 education, and how investments can be leveraged to improve outcomes. Arizona’s support for K-12 education has fallen far deeper than most people realize. 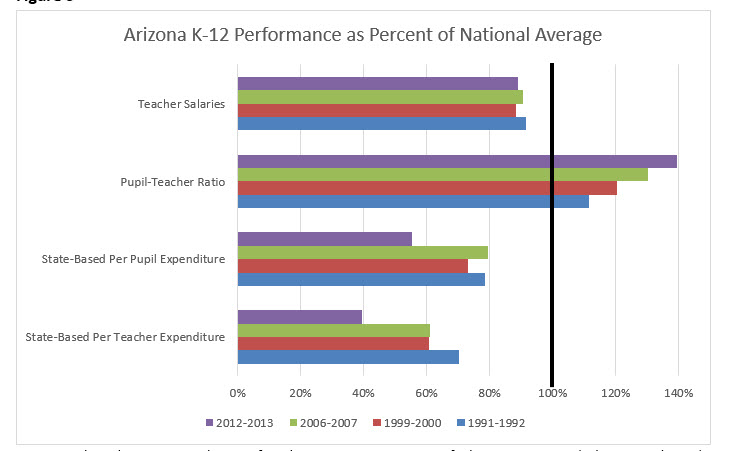 Prop. 123 reflects an important compromise. It gives lawmakers more leeway during tight fiscal times to suspend the automatic inflation adjustment to the base level. However, when growth returns the Legislature is still required to fund it along with future inflation adjustments. With recent rumblings in stock markets, our next recession and those triggers may be on us sooner rather than later, but most definitely before 2025. When it does the Grand Canyon institute estimates the 10-year total flow of dollars to K-12 education under Prop. 123 will be $3.3 billion. The $3.5 billion assumes the triggers are never exercised and that’s not why they were put there and not realistic.

The disturbing part of Prop. 123 is that the state now must rely on the trust fund to meet its minimal legal contribution to K-12 education. The General Fund of the state has been so eroded by tax cuts that even though we are in the midst of the longest period of sustained national employment growth since World War II, Arizona is still running an austerity budget. The budget can be called structurally balanced—but it’s fundamentally short of meeting investments to create the higher per capita incomes that sustain economic growth. Revenue reductions since 1993 now total $4 billion annually and $1 billion annually since 2007. The General Fund nearly ten years after the recession is still below its pre-recession peak, without adjusting for inflation or population growth.

Beyond Prop. 123 our current funding gap relative to 2007 amounts to nearly $1 billion for all-day kindergarten, new school construction, building renewal and what used to be called soft capital. These non-base level areas were cut deeply and not restored. In 2021 the 0.6 percent education sales tax expires, creating another $800 million shortfall, and in 2026, when the state trust land takings return to 2.5 percent annually, the General Fund will need to fund another $200 million. Collectively, that’s a $2 billion annual funding gap.

Inflation-adjustments control only for changes in prices and student enrollment. They don’t provide revenue to give teachers an actual raise. Based on data from the National Center for Educational Statistics and the Census Bureau, Arizona’s teacher salaries remain about 90 percent of the national average—that’s been fairly consistent over the past 20 years. What’s atrophied has been our Pupil-Teacher ratio.  In 1992 it was about 10 percent larger than the national average. Today it is 40 percent greater than the national average. No wonder more than 1,000 teacher openings were not filled as the school year was about to begin—and administrators scrambled to fill them.

Given that lack of investment, our K-12 system does remarkably well, but our choices have not reflected a priority of investing in our future, and our lagging economic growth is a consequence. Prop. 123 assures funding legal minimums. Now let’s explore how to make our K-12 system shine.

– Dave Wells is research director for the Grand Canyon Institute, a centrist fiscal policy think tank.  He authored the Institute’s recent report, “A Fiscal Analysis of Prop. 123 and Arizona’s Underinvestment in K-12 Education: an essential first step,” which can be found at grandcanyoninstitute.org.

For Press Release on the full report go to https://grandcanyoninstitute.org/report-prop-123-essential-but-only-first-step-in-addressing-more-than-2-billion-shortfall-in-k-12-spending-arguably-worst-in-the-nation/

For full report go to https://grandcanyoninstitute.org/a-fiscal-analysis-of-proposition-123-and-arizonas-underinvestment-in-k-12-education-an-essential-first-step-for-k-12-funding/