In brief:
• Arizona invests too little in Universities. The amount invested per student is now less than the 1970s.
• Arizona incarcerates too many. Similar sized states incarcerate 33 to 75 percent fewer people and have also been able to reduce crime
• Arizona compensates and trains its correctional officers insufficiently (and expect it’s equally true for private prison contractors)
• The DOC budget is focused too heavily on incarceration and leaves little funding available for programs and assistance for transition assistance and drug-treatment.
The net effect is an inefficient use of General Fund dollars.
Tomorrow the corrections budget will be heard at Senate Appropriations. In the big picture the picture is disturbing. In 2002, Arizona spent 40 percent more in the General Fund on universities than it did on incarceration. This year, Arizona will spend almost 60 percent more on prisons than universities. 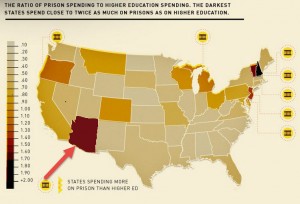 Despite the Arizona Board of Regents’ proposal that the state fund half of all in-state residential students, the measly $8 million increase in the Governor’s budget barely moves the needle, for a state that is currently only footing about one-third of the cost. For those doing, the math, you need to increase the funding to universities by 50 percent to reach the ABOR goal.

If they met ABOR’s formula funding, the general fund would still spend more on prisons than universities.

The state’s systematic disinvestment in universities can be seen in the figure below, which doess NOT include the $100 million cut to universities in the FY2016 budget (2015 Grand Canyon Institute report for Women’s Foundation of Southern Arizona: http://www.womengiving.org/research/): -chart can be updated on request. 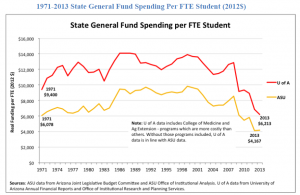 Generally, universities are seen as a discretionary part of the budget which can be cut, while no one has been willing to tackle corrections policy.

At the same time, Arizona is being sued by prison guards for being understaffed and providing unsafe working conditions. A correctional officer in Arizona has 7 weeks of paid training and 2 weeks training at their site, with training the starting salary is $33,000 a year (https://corrections.az.gov/salary-range), https://corrections.az.gov/correctional-officer-training-academy-cota, http://www.correctionalofficeredu.org/arizona/ ) with additional stipends available depending on location. Salaries have been flat for a number of years-so adjusting for inflation, correctional pay—as with most other state employees—has been declining, For ALL employees in the Dept. of Corrections, the average salary has been $40,000 from 2011 through 2015 (http://www.hr.az.gov/PDF/Workforce_Report.pdf, p. 2).
While turnover at the surface does not appear to be a serious issue at the Department of Corrections, the 2015 State of Arizona Worksforce Report found Correctional Officers 1 (incoming guards) had a 2/3 turnover rate, the highest in the state. In other words, for every three recruits, only one stayed for the year. Given the challenging nature of the job at one level that’s not surprising, but at another it indicates a vast waste of resources, the need for better training, compensation, and mentorship. It may also reflect a skill mismatch—as correctional officers need to be exceptionally well skilled, but a high school degree is sufficient to become an officer (http://www.correctionsone.com/column/articles/7155590-Why-correctional-turnover-is-so-high/ and http://www.hr.az.gov/PDF/Workforce_Report.pdf, p. 28—see image below) 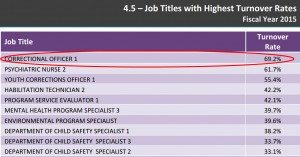 Arizona also incarcerates far more people than other states. As the Grand Canyon Institute pointed out four years ago, Arizona is the ONLY STATE THAT REQUIRES NONVIOLENT OFFENDERS TO SERVE AT LEAST 85% OF THEIR SENTENCE BEHIND BARS. This is called “Truth in Sentencing’ and no other state applies it to nonviolent offenders. In that report, the Grand Canyon Institute estimated the state could save up to $70 million by moving toward an earned release system. (https://grandcanyoninstitute.org/reducing-incarceration-costs-while-maintaining-public-safety/).
Arizona should have a study that examines why we incarcerate so many more yet many other states have lowered incarceration rates AND lowered crime. Here are some states with similar populations to Arizona and the number of people they have incarcerated in 2014, the most recent date available: http://www.bjs.gov/content/pub/pdf/p14.pdf, p. 3).
Arizona 42, 259
Washington 18,120
Wisconsin 22,597
Tennessee 28,769
Massachusetts 10,713 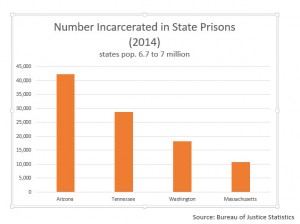 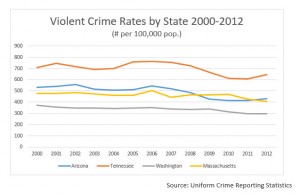 Source: Bureau of Justice Statistics
Yet incarceration policy has not led to a greater change in violent crime in Arizona compared to other states—so more cost effective policies are called for.

About 1,500 inmates are released back into society every month (19,773 in Fiscal Year 2015, https://corrections.az.gov/sites/default/files/REPORTS/Inmate_Population/inmate_population_fact_sheet_as_of_06-30-2015.pdf) .

The Dept. of Corrections reports that 75 percent of those coming into corrections have “significant substance abuse histories.”  That equates to about 15,000 of those released each year, yet in December 2015 only 725 were enrolled in an addition program, DOC says their programs are either 6 or 12 months duration)—( https://corrections.az.gov/sites/default/files/REPORTS/CAG/2015/cag-dec15.pdf and https://corrections.az.gov/addiction-treatment-services) . In 2014, Director Ryan indicated that 2,052 inmates had successfully completed non-DUI related substance abuse programs (https://corrections.az.gov/article/inmate-addiction-treatment-program-success).  Any way you look at it, it’s clear that insufficient resources are available for these programs—and addiction recovery is an ongoing challenge and one that includes many failures often on the road to success.  At last year’s hearing Director Ryan noted “volunteers” as part of how they filled the gap.

Senators ought to ask Dept. of Corrections officials how many people work on this release and transition.  The Grand Canyon Institute has heard the number is astonishingly small (due to lack of resources).  In that conext, Governor Ducey’s proposal to fund a Maricopa Center to help deal with transition issues is very good news—but Arizona does not have a comprehensive plan to really work with the 1,500 inmates being released each month.

At last year’s hearing, Agency head Chuck Ryan mentioned that drug treatment was “prioritized”—this was because they don’t have sufficient resources.

In summary, Arizona needs to enact legislation to use earned release for nonviolent offenders, develop a study committee to create a comprehensive plan to reduce incarceration rates while maintaining public safety, and this will require a shift in resources away from incarceration toward investing in personnel, drug treatment and transition services.

You can download this release, but it is not one of our formal reports, so the full release is under summary.

Supreme Court Rewards Rich with Porsches Everyone else gets Pizza

In its analysis of the state government’s 2.5% flat tax … END_OF_DOCUMENT_TOKEN_TO_BE_REPLACED

AZ Budget Priorities: Massive Tax Cut for the Wealthiest 1% OR Invest in the Education of At-Risk K-12 Students

Budgets are about values and priorities.   One key question for … END_OF_DOCUMENT_TOKEN_TO_BE_REPLACED