PHOENIX —The White House today released high school graduation rates by ethnicity and state.  Arizona had been one of only three states which had seen a decline in the graduation rates from 2010-2011 to 2013-2014.  Arizona showed the greatest decline during that time period.  The newest data released by the White House this morning shows Arizona’s graduation rate in 2014-2015 was 77.4 percent, a jump from the 75.7 percent found for 2013-2014, but still modestly below the 78 percent for 2010-2011.  The national average rose from 82.3 to 83.2 percent.

Dave Wells, Research Director for the Grand Canyon Institute and the study’s author noted, “While today’s data is encouraging, Arizona needs to make a more focused investment to improve its graduation rate to approach 90 percent by the time today’s kindergarteners graduate in 2029.  Our research indicates that improving the high school graduation rate may be the single most important thing the state can do to improve its economic performance.”

The Grand Canyon Institute first measured the economic performance of states based on four factors:

o   a measure of productivity growth

o   a measure of income growth 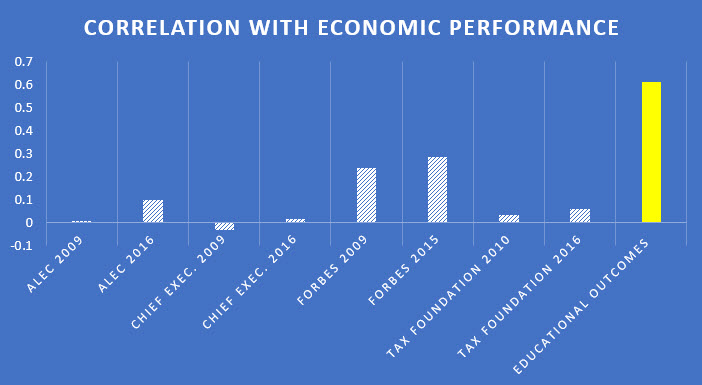 The study found strong positive correlations between economic performance and NAEP scores in 8th grade reading and math, high school graduation rates and growth in the percent of adults 25-64 with an associate degree or higher.

When possible  efforts were made to adjust results for demographic differences between the states, so, for instance, NAEP scores were balanced with students who qualified for free and reduce lunch and those that did not for every state.

The high school graduation rates released today use a new tracking system developed across the states that tracks each student and their four-year graduation rate.  Consequently, it excludes any students who take longer than four-years to graduate, but it does control for students who enter or leave the state during high school as well as student deaths.  Data for it only goes back to 2010-2011. This data is an improvement over the older system which simply took the freshman enrollment and compared it to the total number that graduated four years later, which was a less precise measure. The Grand Canyon Institute study used both sets of graduation data separately and found both had a strong positive correlation with economic performance.

The Grand Canyon Institute , a nonprofit organization, was founded in 2011 to provide a centrist, economic analysis to state fiscal and economic policy by a bipartisan group of leaders including former elected officials, community leaders and academics.

For press releases–everything is included under summary.