This analysis compares the return on investments in programs that support at-risk children relative to two proposed tax credit subsidies being considered by Arizona’s legislature. Key findings are:

The common ground found among some Democrats and Republicans this legislative session has not been with investing in at-risk Children, but subsidizing corporations.

Investing in children is a winner. The Nurse-Family Partnership and Healthy Families Arizona are two programs that help assure that at-risk mothers have important in-house support both during their pregnancy and after birth, leading to better outcomes for both the mother and the child over a two-year period. From age 3, Child-Parent Centers can continue providing community support for parents and their youngsters.

By contrast, corporate subsidies result in a mixed bag of outcomes for the broader community. Rather than provide direct assistance to help at-risk families, these pour resources into profitable corporations.

This analysis examines two corporate subsidies that the Arizona legislature is currently considering. A proposed film industry subsidy would likely induce some growth in that sector—but to the degree it is successful, it will also be costly. And the subsidy will also accrue to existing or already planned projects. While the bill could cost the state up to $150 million a year by having taxpayers underwrite the cost of movie filming and production, GCI expects the cost to not exceed $100 million. The second bill would subsidize corporations who have built up and been unable to fully utilize research and development tax credits and could cost another $50 million.

While the film production refundable credit would likely entice some growth to the state, unlike the estimate by economist Jim Rounds, GCI does not forecast that the credit would pay for itself—rather GCI anticipates it will likely return only about 27 cents on the dollar. Studies repeatedly find these credits do not pay for themselves. While this credit is more tightly constructed to encourage the development of the film industry, it creates a very high bar to be able to pay for itself because it underwrites such a large portion of production costs.

Likewise, while GCI finds that doubling to $10 million the refundable research and development (R&D) tax credit for employers with less than 150 employees is likely a good policy, extending the subsidy to larger corporations is unlikely to have economic development benefits—and will cost the state $50 million annually. R&D in Arizona, while better than many states, has been declining despite a generous tax credit. Yet due to limited taxes on corporations in Arizona, nearly $2 billion in used credits have been stockpiled. States like Missouri that have no R&D tax credit do just as well as Arizona. States that pay companies to engage in R&D such as Louisiana, New Hampshire and Nebraska have less than 1/3 of Arizona’s economic activity. While the big players are California and Massachusetts, followed by Michigan and Minnesota.

Research indicates the return on corporate refundable tax credits is minimal—whereas investing in at-risk children has significant benefits in terms of savings to government, savings to the rest of society (such as reduced crime), and improved economic outcomes (such as higher high school graduation rates) for children.

Policymakers with Arizona’s long-term future in mind should reverse course and invest in at-risk children instead of subsidizing corporations. 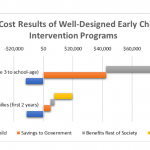 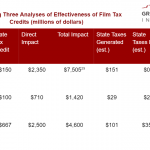 The Grand Canyon Institute (GCI) is a nonpartisan, nonprofit organization dedicated to informing and improving public policy in Arizona through evidence-based, independent, objective, nonpartisan research. GCI makes a good faith effort to ensure that findings are reliable, accurate, and based on reputable sources. While publications reflect the view of the Institute, they may not reflect the view of individual members of the Board.