The Grand Canyon Institute (GCI) has completed an analysis of SB1546/HB2757, which conforms the state to the Federal Tax Code following the 2017 passage of the Tax Cuts and Jobs Act (TCJA).  In addition, it follows the Supreme Court’s Wayfair decision and enables taxing of online retailers who do not have an in-state presence.

These bills, made public this Tuesday, also make significant changes to Arizona’s Individual Income Tax that result in a net loss to the state of $20 million, rather than the status quo which would provide a gain of more than $300 million in revenue based on JLBC analyses, $85M from taxing internet sales and $217 million from conforming with the TCJA (not published).  The state gained part of this revenue this tax year due to default conformity as Arizona’s Schedule A automatically adjusts to the Federal Schedule. A.  However, these bills also increase the standard deduction to match the federal one and lower margin taxes, resulting in a loss of revenue of $326 million—for a net loss of $24 million (details at end).

The proceeds from federal tax conformity and Wayfair could make a significant difference in the lives of children.

In Sept. 2017, Governor Ducey helped lead a coalition of community, business, philanthropic and education organizations in setting a goal that 60 percent of Arizona adults aged 25-64 attain a postsecondary degree or certificate by the year 2030, up from the current 42 percent. Reaching that goal is imperative, since the governor and business leaders agree that within 5 years, nearly 70 percent of jobs will require education beyond high school.  A key part of attaining that goal is “improving the K-12 pipeline.”  The goals identified there were “increasing pre-kindergarten enrollment, third-grade reading levels, eight-grade math scores, and high-school graduation rates.”

In April 2018, GCI put forward several recommendations for strategic state investments that could make a difference in public education outcomes. GCI below reiterates $450 million in key initial investments, if Arizona is serious about reaching these goals.

Recommendation #1: Phase in $200 million in birth to five investments to better meet the needs of at-risk children in poverty.

A growing body of evidence suggests that the first two to three years of a child’s development are critical and home-based targeted programs aimed at improving parenting have high returns. Since the end goal is high school graduation or more, this antecedent is vital.  Today only about 11 percent of Arizona’s at-risk children age 0-3 years have access to home-based programs.  And only 38 percent of children age 3-4 from at-risk households are in Pre-K or Head Start.

In SB1546/HB2757, legislators have simplified the individual income tax code, and provide a large share of the tax savings to middle and lower income households — this is a vast improvement from the tax conformity bill that Governor Ducey vetoed in January. However, these changes make the state even more reliant on sales taxes because the bill reduces income tax collections and replaces them by greater sales tax collections.

Most critically, SB1546/HB2757 makes it harder for the state to make meaningful investments in children that will have long-term economic benefits to the state.

As an alternative, GCI suggests lawmakers consider conforming state standard deduction with the federal standard deduction, while also providing some reductions in income taxes to low- and middle-income earners. This approach would provide revenue for critical investments in children.

GCI recommends that the income tax reforms in SB1546/HB2757 be maintained but that the merged lower bracket’s marginal tax rate be raised from 2.59 percent to 3.1 percent (and a slight change to a higher bracket as well).  The net effect would preserve net revenue gains under Wayfair (about $85 million) and keep most of the same revenue by implementing straight tax conformity, while also enabling the state tax code to more closely mirror the federal government’s.

GCI projects that households earning the median income or less would reduce their taxes owed due to the higher standard deduction, while the state retains added revenue that comes from conformity that would primarily be borne by income earners in the top 10 percent bracket.

GCI illustrates the tax impact on a married couple with two children under 17 (marginal income levels that apply are double those in the chart below, i.e., $0-$53,000 taxed at 3.1 percent under this GCI illustration).  The couple was assumed to have purchased a home on January 1, 2018, so subject to the limitations of the TCJA.  Full details on assumptions of the family were found in GCI’s January analysis of tax conformity, State of the State 2019: Tax Conformity Brings $200 Million to Improve Schools and Stabilize Budget. Twenty-five percent of charitable deductions for those using the standard deduction is included in this analysis and applies to the median and below median income levels.

Married Couple with Two Children under 17

Summary of SB1546/HB2557:  These appropriation bills replace the dependent exemption with a child tax credit of $100 for children under 17 and $25 for older dependents, which phases out in the highest income category, similar to the TCJA structure. In the GCI analysis, the full tax credit is received by each income group except the top 1 percent.  See JLBC graphics with GCI comments below. 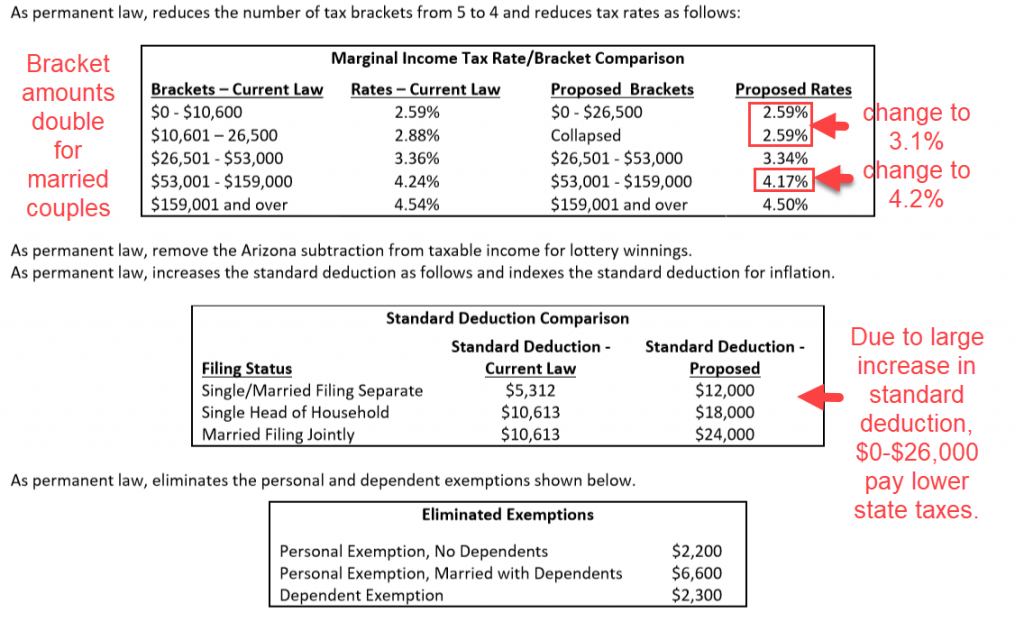 Below is the JLBC revenue impact analysis with GCI’s estimated adjustment. 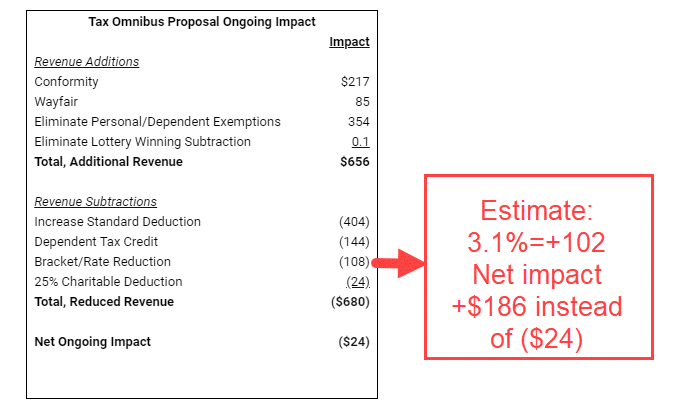 While Arizonians were enjoying their Memorial Day weekend, lawmakers and … END_OF_DOCUMENT_TOKEN_TO_BE_REPLACED

With the effort to revoke Starshine Academies charter by the … END_OF_DOCUMENT_TOKEN_TO_BE_REPLACED