Gov. Ducey’s State of the State: Some Good First Steps But Investments Can’t Be Compromised by Tax Cuts 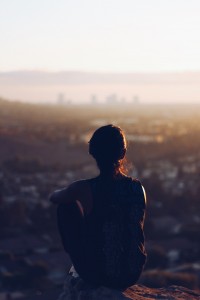 Gov. Ducey’s State of the State: Some Good First Steps But Investments Can’t Be Compromised by Tax Cuts

Prop. 123 as the Grand Canyon Institute released a report last week is an essential first step in addressing K-12 funding.  But $3.3 billion over ten years will not be moving the needle on education funding (GCI assumes one recession during the ten years-reducing K-12 funding from $3.5 to $3.3 billion).  Arizona needs to do better than being the worst state in state-sourced (as opposed to local or federal) per teacher funding, which GCI found is only 40 percent of the national average—due to the lowest state-sourced K-12 funding in the country combined with the third highest pupil-teacher ratio.  (see https://grandcanyoninstitute.org/a-fiscal-analysis-of-proposition-123-and-arizonas-underinvestment-in-k-12-education-an-essential-first-step-for-k-12-funding/)

Gov. Ducey lauded the state universities, especially Arizona State University and its President Michael Crow—the same state universities that had their budgets slashed by $100 million last year.  He did not say whether he would meet the Arizona Board of Regent’s proposal for the state to fund half the cost of education for in-state students.  First step would mean reversing last year’s cuts. In terms of state-sourced spending adjusted for inflation, the state is spending less per student now than in the 1970s. (see University funding portion: https://grandcanyoninstitute.org/supporting-arizona-womens-economic-self-sufficiency/)

The project in Tucson to help released inmates get services and re-integrate back into society appears from discussions with folks in DOC to be effective.  The issue has been location in Maricopa County.  In Tucson it’s located in a former prison complex that’s repurposed and sufficiently centrally located. The Governor did not say anything about the state still being the only state in the country to require nonviolent offenders to serve at least 85 percent of their sentences behind bars—as opposed to earned release under probation as GCI has argued has worked in other states. (see  https://grandcanyoninstitute.org/reducing-incarceration-costs-while-maintaining-public-safety/ )

Likewise, very good to hear about dealing with people with drug issues—at least 70 percent of our inmate population has these issues—the funding has not been there to provide most drug treatment—they instead are placed on a priority list.  It would make more sense to work on reducing sentences behind bars and put the savings into re-integration with drug treatment as well as more drug treatment in prison.  Issues still remain with re-prioritizing how we spend money in corrections in order to reduce recidivism.  Expanding reintegration project in Tucson to also include Maricopa County again like Prop. 123 is a good first step.

Governor Ducey promised more tax cuts—we’ll find out more on Friday, but corporate tax cuts are already phasing in through FY2018 at a total cost of half a billion annually.  Since 2007, tax cuts total $1 billion and since 1993 they total $4 billion.  If the goal of the state is to improve per capita income, these policies have been a failure—the state now has a lower per capita income compared to the national average than it did before the tax cuts began in 1993.  (see https://grandcanyoninstitute.org/a-fiscal-analysis-of-proposition-123-and-arizonas-underinvestment-in-k-12-education-an-essential-first-step-for-k-12-funding/ and https://grandcanyoninstitute.org/the-effects-of-tax-reductions-in-arizona/) 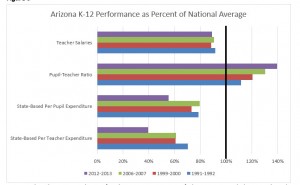